ahh Friday morning... as a "full time" art teacher, I only work Monday through Thursday. (I will be going into school later this morning though, to grade, hang artwork, start prepping a school wide activity, and if I have time, work on my sketchbook that needs to be post marked by January 15th) but the mornings are usually mine, to put my feet up in the hand me- down, lazy boy, blue chair and to drink too much coffee. and today, to figure out how to post student work on my blog!

many of the activities I teach come from the blogs that I follow. leading me to feel like I never have an original idea...I've been trying to alter the assignments to make them more "my own" but again, its hard to feel confident, and not run out of steam week after week, when you are teaching 200+ kids on your own with no curriculum to follow.

september
we started the year with elementary grades looking at Fritz Hunderstwasser's artwork. especially pieces with faces. he used lots of bright colors, big, football shaped eyes and wonderful, simple, patterns. the entire wall outside the art room was filled with the kid's portraits and a few examples of the artist's work, on open house night. this idea came from art projects for kids. although some of the kids, having never had art with a "real art teacher," thought I was nuts, as did their parents, it was a great way for me to learn names and get a feel for how students approached drawing and coloring. 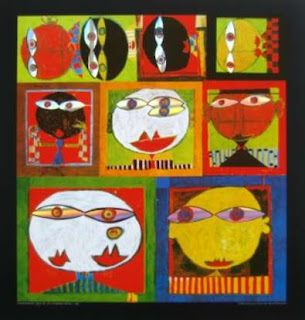 one of the unique qualities of our school, at least this year, is that three schools in the community closed and we merged into a new school with a new name. I had a feeling this would be a big transition for the middle schoolers, having built a sense of community and friendships over the years, and in their last year or two before high school, everything changed. so my first activity with them focused on who they are. we viewed examples of mandalas and looked at how colors and shapes represented aspects of a person's life. they then brainstormed things in their lives that could fall under the categories of heroes, goals, beliefs, passions, gifts and skills. after, students began sketching visual symbols that would represent those things. finally, on a twelve inch circle, they composed those symbols, with a drawing in the center that represented them as a whole. -- this took multiple weeks, even meeting twice a week, but I felt it was a good stepping stone for the middle schoolers. each class they had something to talk about!

october
I had so much fun in october! so many great fall ideas that I went straight through november with the scarecrows and pumpkins. 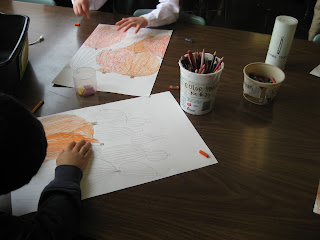 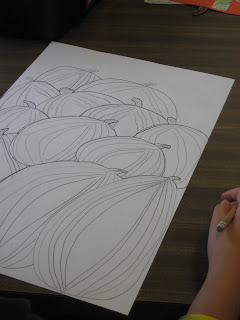 After learning about primary and secondary colors, both second and third grade learned about overlapping to show space and intermediate colors like yellow- orange and red- orange and drew these great pumpkin patches! again, I think this came from Art Projects for Kids.

fourth and fifth grade worked on "Scream" portraits after finding the elements of art in munch's scream, for most of october. I would post pictures, but I don't want to place student's faces on the internet. to make their portraits, the computer teacher had the kids take screaming pictures using photobooth, and we cut and pasted them into our pictures. the activity was a huge hit! everyone who visited the second floor loved stopping to look at the "scream" poster and then the students' work.