In addition to starting a new position at the high school and my two graduate courses, I have taken on an after school club called Creative Minds. For the last few years, the school's secretary along with one other person, ran the club, doing a variety of crafts and even cooking. Between her duties in the office and the club, it became too much. Recognizing the importance of such a club for middle school kids, I offered to keep it running on my own.
The kids are great! I have had some rough weeks lately, but I look forward to hanging out with my Creative Minds kids each week. Here's what we have been up to so far: 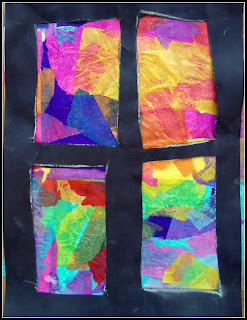 The first week we designed silhouetted windows.
The above image is an unfinished example.

The following week we used scratch board and white paper, inspired by  Art Projects for Kids Scratch Tree. 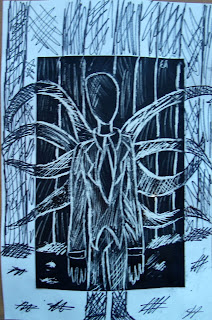 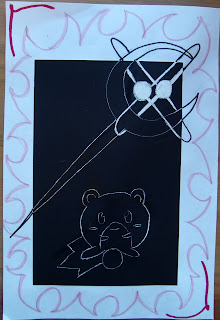 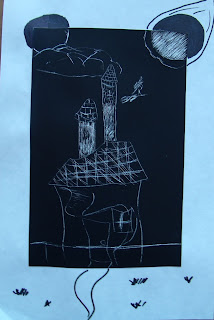 Some kept with the Halloween theme while others, like to top two, were inspired by video games and cartoon characters.

For the last two weeks, Creative Minds started painting designs for an India ink batik. I love how these always turn out. This will be the third time I have used this lesson. The black of the ink makes the designs really bold and graphic. The kids are always in mourning almost that they have to paint over their designs with ink, but thrilled when they get to wash it all away. I will be sure to post after Thanksgiving break.