Perhaps I should be more creative with my titles... I'll get there.
For as uneventful, or unproductive, as yesterday was, I was exhausted by ten pm and slept uninterrupted until six thirty this morning.The haze and fog are still here and despite my cup of coffee, its a little difficult to wake up. But that is okay for now, as I am not sure what day three will bring.

Day two on the other hand started even earlier. I didn't sleep very well on a new to me, institutional mattress, in an unfamiliar place. Plus there was a wicked thunderstorm just a couple of miles away that sounded like it was right over the condo. Without the tv working, I spent the morning streaming NPR, enjoying breakfast and coffee in the condo all to myself.

By nine am we were off to the field station... in a down pour! Thank goodness I borrowed a  rain coat from my aunt, or I would have been miserable the rest of the day. At the field station, we set up our workspace.

The room with the sliding doors is now our studio space. This set over looks Nantucket Harbor. (there is a second set on the opposite wall. Lots of light and spectacular views) If you count the "points" from left to right, we are just about across from the third point. Our condos are four miles back toward the center of the island, to put everything into perspective. 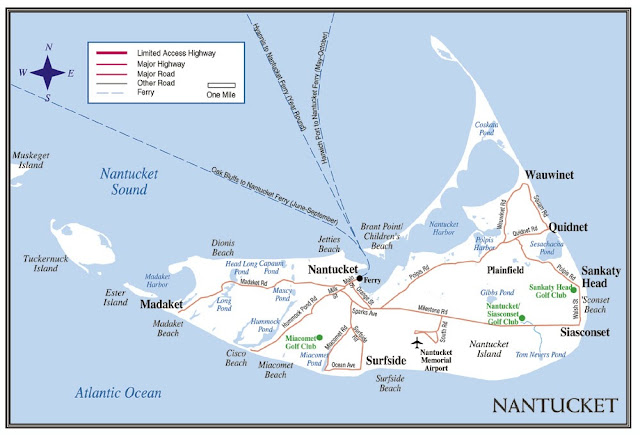 There is a bike path that I would like to attempt soon, but the weather doesn't look like it will cooperate. If we miss the van in the morning, it would take a solid hour and a half to walk. I googled it last night. I am guessing forty five minutes to bike. On "school days" I will be sure to catch the van!

What is cool though is that we really to have free reign. If we want to go over and work in the afternoon, at night or on the weekends, we can. I am really anxious to start painting, so I may go over today.

Yesterday though, the director of the field station chatted with us for a while about the island. I knew Cape Cod was formed by glacier movement, but never really thought about Martha's Vineyard and Nantucket forming that way too. At one point, the Wampanoag were able to walk from what is now the main land, to Nantucket, to enjoy cooler summers. That's really cool! However, now erosion is a huge problem. On the south side of the island, beaches are loosing feet each day. FEET. We might be the last class at the field station because they have to physically move the building before it falls into the harbor. Its safe! Don't worry. But it needs to be addressed before it is a problem. In the picture above, I am standing right before the poison ivy, which is right before the drop off into the water.
We had a lovely talk about ticks and poison ivy too. Not to scare us, but to be aware. I plan on staying on the paths, that's for sure!

After the director spoke, who is awesome by the way (and also named Sarah), our professor gave an over view of his goals for us and this course. I was the dork with her sketchbook out taking notes! His points about Western vs. Eastern views of creativity and landscape painting, were spot on with concepts discussed in my creativity classes. He basically said that there are "learners" and there are "imitators", in life, not just art. And while it is good to occasionally be an imitator, he wants us to push ourselves to be the "learners". I interpret that as becoming innovators within our own skill set, creativity and education. More specifically with our painting, he wants us to really think about space and composition as well as color in terms of temperature, not just value. Overall I think he wants us to create images with a sense of drama, and not just the happy little lighthouse with the horizon in the middle.

After lunch we went to the Whaling Museum. We had a very informative lecture about the industry, but spent little time in the exhibits.

I am fascinated by the scrimshaw! I want to look into how may scrimshaw turned into sailor tattoos. Can you see the similarity?

Afterwards, a few of us walked down to the docks to check out all the fancy yachts. With such awful, unfun weather, there were a bunch in.

Of course, did I take pictures of the pretty boats? No. Just seascapes.

We also walked over to a nice bar and had a couple of drinks before heading to a movie that was part of the Nantucket Film Festival. The movie, Running from Crazy, was just ok. After reading The Paris Wife, I have been intrigued by the Hemmingways. This movie was about Muriel Hemingway, daughter of Jack, Ernest's first son. Unfortunately the story line was very disjointed and choppy. After the movie, most of us went to grab a bite to eat and it was very enjoyable to sit and have an intellectual conversation about what we all watched.

We walked the 15- 20 minutes home and I was out like a light! I'm still on a teacher's schedule for sure!

Email ThisBlogThis!Share to TwitterShare to FacebookShare to Pinterest
Labels: Nantucket