Drawing, as an adult, continues 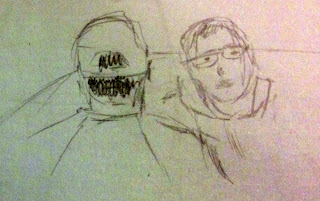 I don't think I have EVER been kicked out of a bar. There was the one and only bachelorette party I went to where we weren't even allowed into the bar... But I have never been asked to leave a bar...
Until this Thursday.

So if you missed the previous post, I am taking a drawing class that meets in a different pub each week. This week, due to the location, my classmates sort of trickled in, finding a few seats here and there at high tops and at the bar. I sat a few seats down from the teacher, next to one of my classmates who works for a children's book publishing company. We each ordered food and drink and casually sketched and chatted as we waited for our food. After we ate, my classmate and I agreed that our vantage point was a little spent, and eyed a high top table. A waitress hesitantly came over after we settled in, asking if we would be ordering anything, as these tables were part of the dining room. We each said that we would order and she brought over a drink menu. Upon her return, she asked if we could move back to the bar, since there was room.
I was a little annoyed, but I understood. We were not going to be a high paying table since we had already eaten. We awkwardly went back to the two seats we just occupied, explaining to the bar tender (whom we asked prior to moving if it would be okay) that we were asked to move. I don't think she really minded after we both ordered another drink.

As I was working on this drawing 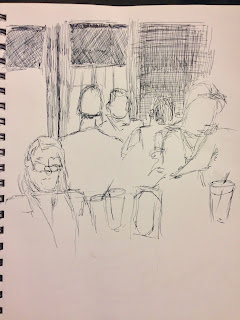 a woman, I later identified as a manager, started speaking to our teacher. I couldn't hear what they were saying behind me, I was in "class" after all trying to focus on my work, but it sounded like she was concerned. Like a game of telephone, the message that we should stop drawing people made its way down the bar.
Before I could even start another drawing, the manager looking woman started speaking loudly from behind the bar, at the teacher. "You couldn't even respect my wishes..." What? One of my classmates spoke up mentioning that we had all been there for at least two hours, had paid for meals and drinks. "Are you asking us to leave?"
Pretty much.
My classmates settled their bills and discussed going to a dive down the street. It was about 8:30 at that point (class is from 6:30- 9:00). I opted to settle my bill, finish my drink and go home. It was a school night!
My children's book publishing classmate decided to do the same and we ended up staying til 9 talking about books, illustration and the state of education and literacy in MA and the nation. I might have scored a free Caldecott Award winning wordless picture book, as well as some networking that might allow me to get in touch with illustrators willing to talk to high school students. Let's just say she works for a company that appreciates dots and ish. (mom, those are titles...)

So really, I was defiant and didn't leave the bar. The drawing may have stunk that night, but the intellectual conversation and networking was absolutely fantastic.