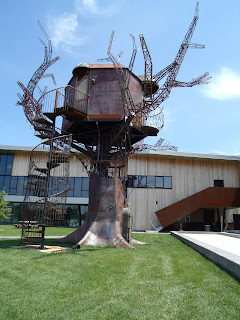 Life has been happening!
School has been over for a few weeks. I may or may not have some lessons to post. I will have to check my camera and plan book and get back to you...

In the mean time, I did some traveling, started my summer job and have pondered the future.

The picture above is a steam punk tree house outside of the Dogfish Head Brewery in Delaware. While staying with my boyfriend and his family in Ocean City, New Jersey, we met up with my boyfriend's college roommate and his wife. We took the Cape May ferry over to Delaware and had ourselves a beer- centric day. We had a tour of the facility, tasted a few beers, and headed to the brew pub for lunch. I still can't get over a beer made with coconut water. I really thought it could be awful, but it was fantastic! Unfortunately we could not take any home, but I have been enjoying the company's peach beer instead. 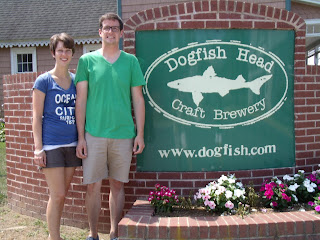 Our week at the shore had to come to an end though. I had a great time relaxing, reading, spending time with family and meeting new people. I have never had such a nice tan, nor have I ever eaten so much pizza! (Mack & Manco's, super good, but consumed at least four times over seven days!)

After a couple days recovering, doing laundry and celebrating the 4th, it was back to work for me. I have been worried about the summer program since at least April. I know how my old program was run and gave myself some lofty goals. But the first few days went well! In fact, the days flew by for me, so I hope that means the kids had fun too. I know there are some long, hot days ahead of us, but the kids really are great and my staff knows what they are doing. So here's to an enjoyable summer!

As I've said, I've also been pondering the future.
I have been accepted to grad school and been awarded a comforting financial plan. I'm really excited that this idea to continue my education is going through. Sometimes I feel like I am stuck in a rut with my teaching and lessons, and lost when talking to non- "specialist" teachers. I also thrive (mostly) under pressure. I loved the thrill of meeting a deadline in college. I know grad school will be lots of research and papers, not so much figure drawings and textile pieces, but I am looking forward to it.

Finally, the big cliff hanger...
I have had two interviews for a part time, public, middle school teaching position.
I heard through the grape vine that there was a position opening due to retirement. I sent along my resume, like I have done every year since college graduation, and thought nothing of it. In fact, when I got a response saying that the mentioned position was filled (by someone who had been laid off) I was only bummed for a few seconds. I have a job and a school that I love! But then came an email a week later, asking if I would be interested in a part time position in a middle school. I figured, whats the harm in meeting and finding out more? At the very least the superintendent could finally put a face with my yearly email.
And that was that. She liked me so much that she called the principal of the school before I even left her office, requesting that he meet with me as soon as possible... I met with him this week. In fact, I was there for over an hour and even received a tour of the school.

So here I am.
Enjoying my summer full of friends and family, weddings and barbecues. My mom is even visiting from Florida! I'm excited for the fall to start graduate classes. I get to hang out with some kids three days a week, plan things for them to do, and get paid for it. And looming over my head is a big decision. It may not even be a decision pending the principal's choice. But things are changing around here, that's for sure. 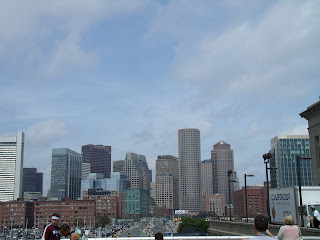