I'm a little late posting these... the entries were due in November. But between trying to figure out what I'm doing in my new school, graduate school and life, blogging has fallen by the wayside. 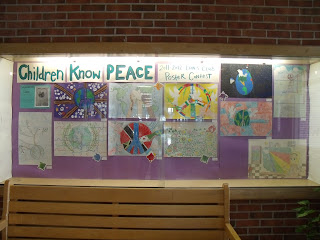 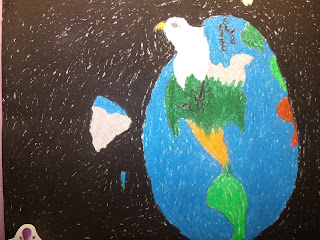 I gave students the option to work on poster designs in class for a few weeks after showing the video introducing the contest on the Lion's Club website. I think that could be why I had almost 50 entries! I knew from asking in my interview (if there were any traditional exhibits or contests) that the Lion's Club annual poster contest was a place my principal really wanted our school to be showcased. I have never entered an art "contest" or facilitated one, so I wasn't too sure of what I was doing. Add to that my principal being out the week entries were due and I really felt like I was in over my head. After speaking to a parent, whose son stayed up super late to make sure his entry was in, only to find out that he was over the age limit (above), I realized I needed to do more than just pick a winner. So, when my principal returned the following week and saw the above display in the lobby, I felt pretty good.