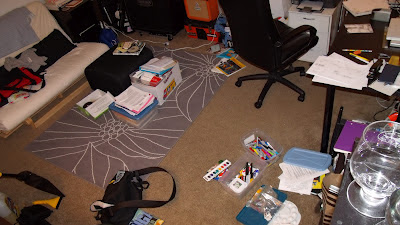 Come to find out, even in the summer, I am pretty much worthless after 8 pm, especially when it comes to trying to plan and do anything academic. I have spent the last few days penned up in what we affectionately call the "rumpus room." There is a futon, filing cabinet that is no where near organized, hence the boxes of stuff ready to be filed in front of the futon, guitars, amplifiers, cubbies full of records, a desk, and numerous plastic shoe boxes filled with art supplies on any available shelf or floor space. I am half way through the first draft of my second paper due tomorrow (for 50% of my grade!) and I just couldn't type anymore once I had dinner. I decided to draw instead. 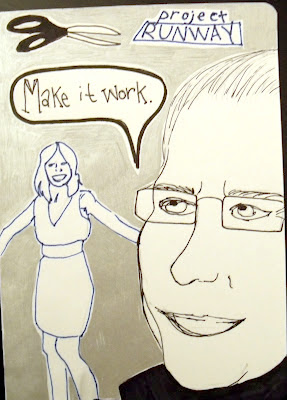 Today's, or maybe it was yesterday's (I've lost track) challenge was to draw your favorite TV show. This isn't exactly my best work, but the two main characters of the only show I make a point to watch have been rendered in a simple line drawing and color palette. I think I have watched every season of Project Runway, including All Stars, whether it has been through Netflix (since I didn't know the show existed until 2005) or on Hulu (since I no longer have cable).

I love the show for numerous reasons.
One, its reality television. I watched the Real World when I was a teenager and appreciate where it all began. Who can resist the drama and suspense (and wonder what was edited out)?
Two, I love and appreciate when you can see the creative process in action. Even more, I love when you can see designers grow and flourish.
Three, I can't do what they do.
I should, or at least I should be somewhat able, as my concentration was in textile design. I remember long nights in the studio with the sewing machine trying to get my samples straight! And yet I hate, hate, hate having to hem my own pants. I even put off putting a button back on a shirt until I absolutely have to. I can't even image creating an entire garment, let along fashion line!
After a quick google search of 'Tim Gunn' for images to help with my drawing, I read an article or two about his history. I have a greater appreciation for Tim Gunn knowing how many years of dedication he put into Parsons and how he revamped the curriculum in order for graduates to be more a part of the twenty first century. Who know?