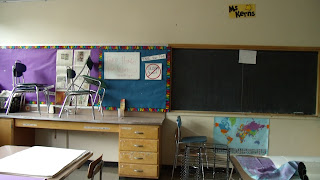 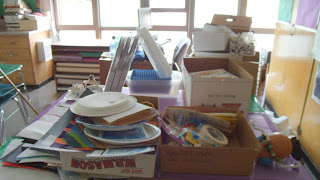 My classroom (and apartment) look as though I am moving. I'm not. Just organizing!
Last week I went through file folders and binders of lessons and resources I have acquired over the last four years. (I can't imagine all the stuff I'll have by the time I retire, but hopefully by then I'll have a classroom to myself for more than a couple of years. hopefully.) I managed to get all of my first three years into a large binder, sectioned by grades. My stacks of paper from last year have been divided into files, ready to be moved back to school and into my one sticky file cabinet. 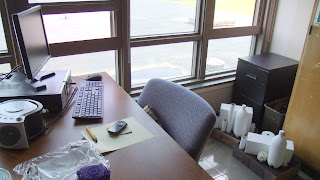 I am looking forward to having my own, functional work space this year, equipped with a new computer! I use a cable plugged into the headphone jack of the computer to the little stereo and play a shuffle of Pandora stations while the kids are working. It'll be so much easier now to use the player, not to mention use all the other applications.

I didn't do too much the first day other than move a bunch of furniture. Including this homemade flat file that was between the two sinks. It just didn't make sense to me to have paper storage where there was water, so I decided to try to move it. 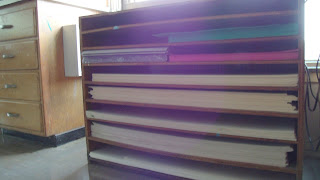 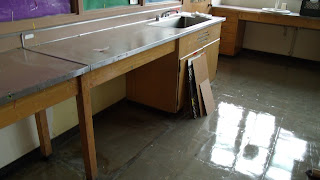 You can see on the floor the marks left from where it was. I had to use a screw driver to loosen the years of wax build up. And once it budged, I used a broom handle as a lever and push it away from the wall. Now in front of my desk, I can use the file to store large paper and use the top to organize handouts. 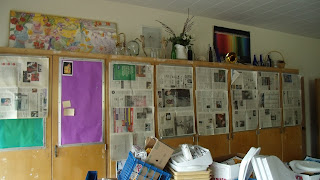 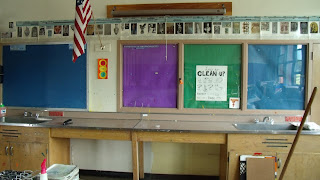 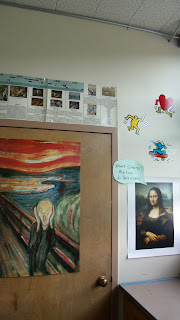 Today I mainly cleaned up my sink area. I plan on putting wire shelving under the counters for cleaning caddies and some paint storage. My most favorite part of my room so far are the Keith Haring stickers I found at Ikea. They make me smile and I hope the kids like them as much as I do.