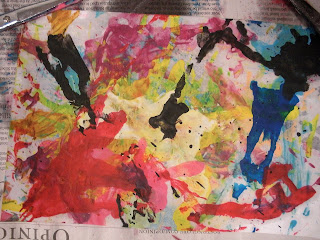 We took a brief hiatus, but my Creative Minds group is back in session!
Its taken us a couple of weeks to get back into the swing of things though, perhaps due to the fact that I actually PLANNED activities. One Saturday morning, before my graduate classes started, I sat down with the schedule and planned out almost ten weeks' worth of activities. I then promptly made a shopping list and tried to procure everything we may need that I don't already have. Now that classes have started, I am really glad that I had enough foresight to plan. (Thank GOD for this snow day too, because I used most of it to read for grad school and prepare/cook in case we loose power) However the first couple "meetings of the minds" didn't go as smoothly as I planned, not that the kids cared! 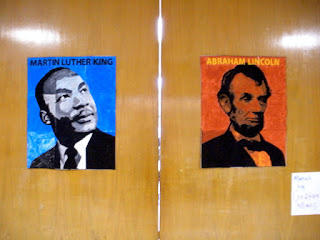 Week One fell the week of MLK Jr.'s birthday. February also holds President's day, so I purchased the Mini Great Americans Murals from Art Projects for Kids. This activity was hit or miss. I had one or two who were really up to the challenge of a coloring page with oil pastels while others couldn't stand to get greasy. However, adults and students alike are amazed with the results. Our principal even wants to frame the finished products! But poor ol' Washington remains unfinished since enough students were thoroughly uninterested after the first page.
Week Two was just a flop. Typically, I will take out a handful of materials, present a few ideas and let the students take off. If they want to complete the ideas I presented great, if they have other ideas for the materials, even better. We are "creative minds" after all!
Week Two was crayon based. I provided sand paper, crayons and irons to do prints and three hair dryer stations to melt crayons/ crayon "en-caustic." Everyone wanted to melt crayons, but I let the students who volunteered to peel crayons (not knowing what we were doing yet) go first. I had also hoped that the George Washington mural would get done, but after the previous week, I knew there was no interest. After a demo and strict safety speech, I had all three hair dryers going with teams of students helping each other for about five whole minutes. Then we blew a fuse.
While waiting for the custodian, I explained one of Week Three's projects in hopes to keep the preteens' attention. Thankfully most found themselves busy and under the kind custodian's suggestion, we kept it to two hair dryers plugged into different walls of the room. We were successful and while the kids had fun, I just laughed and hoped for better luck next week.

Week Three was much better. Or at least I think so based on how engaged students were. Who knows, maybe they were bored out of there minds, but cool things happened from my point of view. 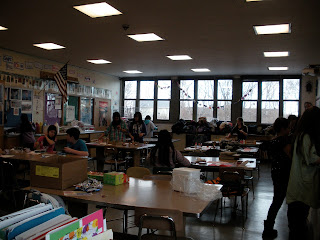 There were multiple painted paper options available, as the plan next week is to use the painted paper for various Valentine's Day themed crafts. We used the box tops that come with reams of paper and loaded them with construction paper and paint covered marbles. Old school "marbled" paper! I also cut up some paper towel tubes and showed students how to fold them into a heart shape for stamping. Finally, we brought back the hair dryers and kept it to two going at once. Below is a student's "en-caustic" after adding water color and dabbing with paper towel for texture. Can you tell his favorite color is blue? 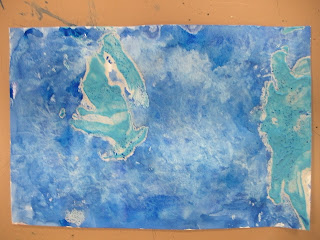 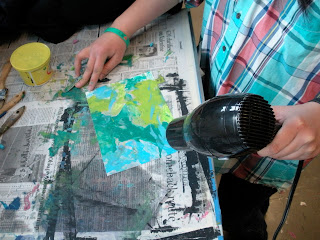 "En-caustic" in progress. This student has a great eye for color. Ignore the smock... my boyfriend donated all his old plaid shirts to the art room.

Now that we seem to have our routine back, I am looking forward to what these folks create. I have grand plans for paper mache and perhaps some Chihuly inspired sculpture in between holiday crafts and silliness.