THIS is what I have been working for 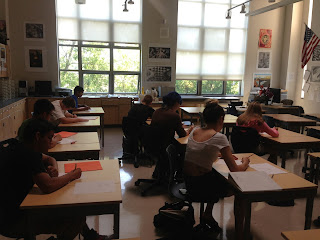 I have been a little absent from blogging since school started. While I have a general idea of topics I want to write about, its hard to sit down and type sometimes. Some of it is because writing is a slow process for me. (grad. school was not pretty at times!) But mostly it is because, for the first time in my life, I have free time!

There is prep time built into my schedule at the high school, so for the most part, I don't have to put in hours after school. I will be hosting Art Club once a week, but I decided not to start until October. Between PD sessions about the new teacher evaluations, open houses and the what not, I felt it was better to ease into  it.  I have also been pretty good about walking after school, at least a half hour, every other day. It doesn't sound like much, but I have never had a fitness routine, ever, so this feels great and I want to keep it up.
That's actually why I wanted to blog today. I feel so stinkin' lucky! My school year is off to a great start. While it is my first year full time at the high school, I feel very comfortable. My class sizes are just a little smaller than last year, 28 tops instead of 30, and the activities I planned for the first few weeks have really set the tone for the year. I plan to write about them more in depth, perhaps even later tonight, but for now, I am totally excited about where this year will go.

I feel like I worked so hard for years, between my undergraduate degree, working as an RA, then student teaching, to working at an after school program and parochial school, to working on my Master's and getting my foot in the door in a public school system. Everything feels like it is finally paying off and I am so lucky and excited.