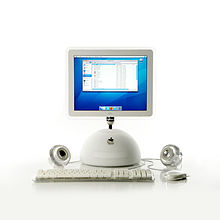 I again apologize for my lack of blogging this school year. I've come to realize that my computer is a slowly dyeing breed. I started college with the above iMac G4 sans mesmerizing, clear plastic speakers. It was the first big purchase I made on my own, with my own money. It might have lasted four years of college, but my little academic heart didn't want to chance the temperamental AppleWorks and other applications as I set out to student teach and find a real job. I donated it to a school and I bought a cute, little, white iBook G4 my senior year of college with a loan from Nana. Now six years later, its still truckin' but ever so slowly.

I plan to buy a MacBook Pro come September, if not before, with my (graduate) student discount. I will be able to have a Picasa account and update my iPod, two things I currently can not do. Nor can I watch awesomely stupid videos on Facebook. Seriously, how else am I supposed to spend my time!?

Actually, I have really been enjoying my time lately. This is the first summer since I was probably 14 that I am NOT working. My second class of the summer is finishing up this week and I am looking forward to some beach time and perhaps some time planning and in my classroom. I've read a handful of books, I visited family both here in MA (Mom came for 4 days!) and on Long Island, and I've spent time with friends and their new baby. I've even found time to do art! 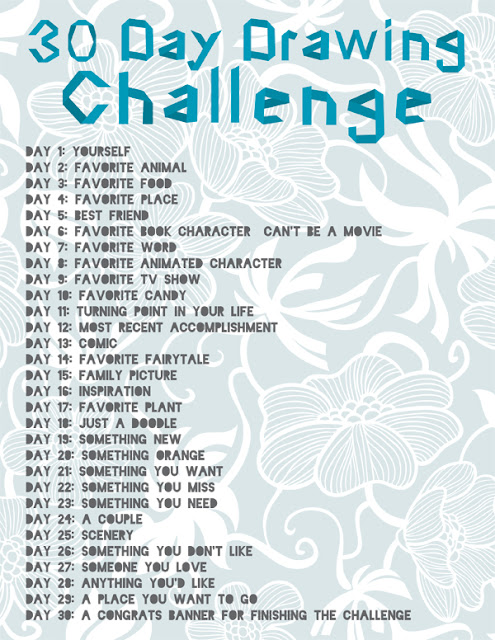 At the end of the school year, I made a bunch of copies of this and left them in a pocket folder on the bulletin board in my classroom. I told my students to take one if they tend to get bored, just want to draw or want a challenge. I said that I can't promise a reward, but if they come in next school year with all thirty drawings, I will think of something. So vague! (I dunno, maybe a candy bar? a check in my grade book?) But many kids took a copy and a week or so ago I thought I should step it up and try myself.

Life kinda got in the way though when I was told last week that the exhaust system in my 1999 Honda CRV (with over 100K) was totally rusted and it would cost a lot to replace it . Needless to say, I took a few days off from drawing to contemplate what to do, finally deciding to purchase a new car!


A week in and its still nameless, but so far so good.

And back to the drawing.
Today I finished this: 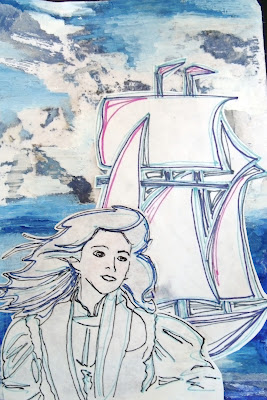 Day 6: Favorite Book Character
This is Charlotte and her boat from The True Confessions of Charlotte Doyle by Avi. I think I read this in middle school and totally identified with the character. The original copy is still on my book shelf, dried glue, yellow pages and all. I wanted to modernize the cover and after a failed attempt of drawing Charlotte free hand, I decided to use the collage technique I've come to love.

I was aiming for street art. Whether I hit the mark or not, I don't know. But so far this is the page I am most satisfied with. I'm trying to take each page a little beyond drawing. I am also making it into a book once I have all 30 pages done. It feels really good to be making art and staying in practice. I will keep you posted!
No comments:

First of all, thank you for continuing to read my blog!
I know I have been rather absent and haven't really posted anything about lessons, which is one of my primary goals for this little side project, in like months. I can't promise that I will go back through anything I did this past school year over the summer, but I'd like to say that I will try. While the school year wrapped up for kiddos back in mid June, I just finished an intense online course that started in May and started another course in person, this week. I'm truckin' through my grad school requirements! I really enjoyed the online course, albeit crazy amounts of reading and sometimes rather abstract, like how chaos theory could help explain creativity... yea, that happened.  It was called Seminar in Creativity. I will try to explain later, this post is about The Sketchbook Project. 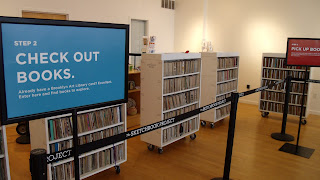 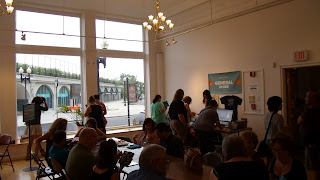 The space itself was pretty cool. Really high ceilings with fun chandeliers that had intricate crown moulding around the base on the ceiling. There was a fire place and huge windows with natural light pouring in despite the over cast day.

From where I live, Lynn is like traveling to a foreign country. Its only forty minutes away, but on the other side of Boston. The buildings are much closer together and the streets are narrow, even the main drag, and winding and occasionally one way. I went through numerous tunnels (thanks Big Dig!) and two rotaries or " round- a- bouts" for you non- New Englanders, just to get there.  I'm very happy I had a GPS. And thankfully there was free on street parking. However there was next to nothing that looked open in the surrounding area. Of course, there was a Dunkin Donuts. As my boyfriend would say, "You can't swing a cat without hitting a Dunkin Donuts" around here. I don't advise swinging cats though.

During a lull in the action, there were only a few people in the space along with a camera crew and the staff. I'm not sure what the crew was for, but I was asked if I wouldn't mind being taped while answering a few questions. Turns out Steve, who chatted with me, is co-founder of the project! Since none of my students came during the time I was at the show, I plan to write a little something up for the local paper and perhaps attach the photo.

I know its a huge project, with thousands of books from around the world, but I am very glad that I participated and was able to provide my students with the opportunity.
Would I do it again with kids? I don't know. There are things that I would need to change if I did, on my behalf. One of the things I've really had to learn as a new teacher is how to advocate for myself. And while I got the funding to do this project, that was it. I had no other support. Administration wanted this project to get our name out there, but no one set anything up to get it there. I think the long time frame of starting the books in October and the show not being in the area until July was an "out of sight, out of mind" type situation. No one asked me if they could set up some publicity for me and I did what I could during the art show and passed out "save the dates" to students, but the end of the year came and went. I know what I could do differently next year and I hope that if I decide to do this again, that my ideas are fully supported and I'm not just pushed forward on my own. I need support.

What I like about the Sketchbook Project, with my heightened sense of how creativity works thanks to my grad school work, is that it provides people with the opportunity to be creative. This is a chance for people to test the water so to speak. There is no right way or wrong way to fill out a sketchbook and thats the beauty of it! 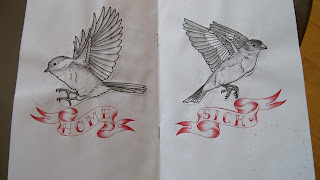 I came across this "Encyclopedia of..." sketchbook and the ideas that came through the imagery resonated with me. This person's book became therapeutic.  She had something she needed to work through, like my book from last year, and it probably felt awesome to get it out!

For kids in particular the Sketchbook Project is a way to find a process that works for the individual and be able to have confidence in the final product. By mailing it back, you get this sense of accomplishment. You have finality. Some people get stuck there in their creativity, they don't want to finish their work for fear of not knowing what happens next or fear of outside criticism. You will never have to know what others think about your Sketchbook and if you do, go to the show! Or post images online. In today's global society, if you really want feedback about your work, you can find it. Just be prepared for the good AND the bad.

For my students, I know how great they feel for having put so much time and energy into their books. Each one is so different! Through the process, they found materials they liked to work with, or not. They had days they didn't want to talk to anyone while working and days they couldn't stop laughing. I know that for them, just having the opportunity to come to the art room for a few hours each day, and to be welcomed and encouraged, boosted their self esteem in ways that I will never fully know. As cheesy as it is, thats the truth. Whatever process they find, whatever their favorite medium, doesn't matter. That confidence and positive relationship with themselves is the biggest thing I could ever hope to provide my students. 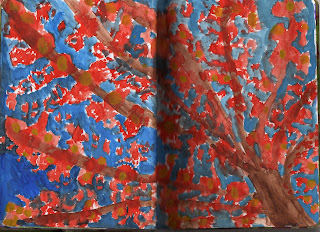