is it the week before vacation or what?
it feels like we all have one foot out the door ready to bolt. and then, when we get back, its only a few short weeks and the summer will be here!

with everything going on, my poor 8th graders will have very little in their portfolio to choose from when it comes time to put up the art show. we do have until the beginning of june, but thats really not a lot of time.
currently we are working on still life value drawings. we are focusing on composition, drawing from observation, creating a range of value and the illusion of space. I brought in an almost 5 foot tall charcoal drawing of an interior stairwell that I did in college and asked questions about space and value. I really hope we can finish before the art show... I'd love to work on a self portrait and wire sculpture before they "graduate" June 10th!

last week, after finishing up another artist study, this time of van Gogh, grade 2 took some time out for a holiday themed activity. I really need to get better at coming up with original ideas. I really do! we painted bunnies like this lesson I found at Deep Space Sparkle. 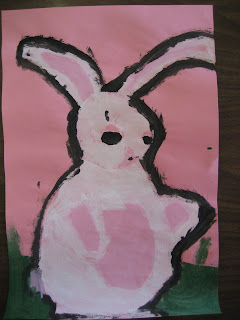 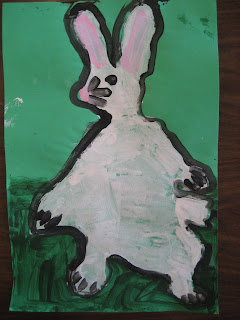 here is a dilemma to ponder:
first we drew with chalk on color paper. next, I placed a tray with sponges of white paint. as students were finishing sponge painting, I placed another tray with a multi cup holder of pink, black, and green paint. as I placed this at each table, I gave very specific instructions to the small group of three to five students. (first add pink details with the pink paint brush. second, trace your chalk lines with the black paint brush. third, add grass with the green paint brush) out of 36 students, I had 2 like these: 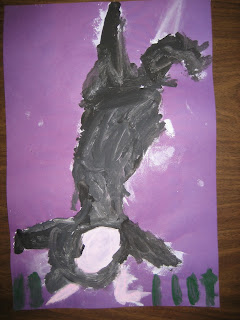 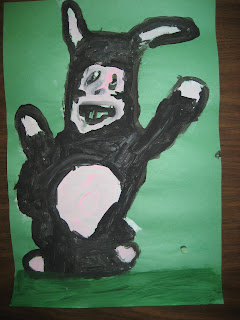 both students sat at the same table.
"copying" usually happens at the same table. I don't encourage it, but I hardly ever say anything. maybe thats wrong, I don't know. if students mention it to me, I remind them of the trees we look at at the beginning of the year... we look at pictures of trees done by different artists throughout history and talk about how we all have our own style even if we have the same subject or idea. of course I encourage thinking for oneself but sometimes theres something to learn from other people.

in this particular case though, I was bummed. the student with the purple background had made a mistake with the white paint. typically, that would throw him off for the rest of class. his painting would become a giant mess, or he would sit, do nothing and be grumpy, or both. but this time, this time he creatively solved his problem! he used what he had and fixed it! our plan was to add white oil pastel when the paint dried to add eyes and other features.
the student with the green background had followed directions very well, up until he saw the other student's work and decided to use the black paint for something other then what was directed. I am sure there are black bunnies in the world. and I can't blame him for wanting to be "creative." but I just didn't know what to say or do... I asked how his bunny became black when it was white before. *shrug* I also asked if it was because he saw someone else do it. he said no. I asked if he had followed directions. umm, not really. I didn't know what to say or do from there. I said okay and we continued with clean up.

I feel like I still have a lot to learn!
Maybe sometime during vacation I will post about how we made Easter lilies out of our hands and how I am awful at giving directions...