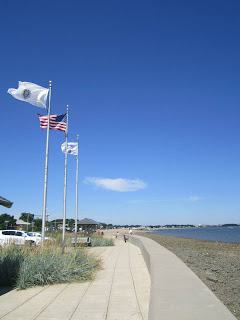 The rest of the week we took a little easier than Day 1. There were lots of people to visit!
On that Tuesday, I unfortunately had a dentist appointment that I had already rescheduled due to my Nantucket adventures, so I had to go. Trying to kill some time in the morning, I brought Mom to one my of favorite spots along the water. That's Mom's photo above. She also caught me, below. 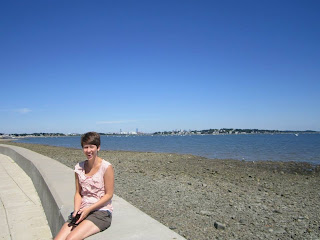 Afterwards, I took this as an opportunity to go look at some of the real estate on that little peninsula to my right. Mom was an agent when we were kids and I grew up enjoying scoping out new listings and beautiful properties. Who better to go snooping with than my Mom?

After the ever exciting dentist visit, we drove to Plymouth to meet my Mom's oldest friend from high school. She lives on the Cape, so while we didn't visit the pilgrims or the disappointingly tiny rock, the Cabby Shack where we had lunch, was a nice half way point. It was an absolutely gorgeous day to be by the water with clear skies and no humidity. We all caught up over fried seafood, clam chowder and drinks. On the way home, Mom and I did some shopping at our favorite, Christmas Tree Shoppe. We love a bargain!

Wednesday we slept in, grabbed some Dunkin Donuts and went back to the beach for some sunshine. Later in the day we had lunch with my boyfriend's parents and then hopped back on the train for free admission to the Museum of Fine Arts. (I hope to do a stand alone museum post at a later time, since I have visited a couple this summer. Stay tuned!)

When we returned from the museum, my brother had arrived at my apartment a day early to surprise my mom. It was awesome! We sat around my kitchen table, just like we would have at our old house, chatting until we were all too tired to talk anymore.

Thursday morning I brought my mom and brother to a breakfast spot I could walk to from my old apartment. It's across the street from the birth houses of John Adams and John Quincy Adams. Next time we will have to get a tour there, but a cheap, greasy breakfast was more important this time around! Check out all that bacon!
Instead, Mom and I were educated in the afternoon when we went to the John F. Kennedy Library.

Not much had changed since I was there in middle school. I found it to be really well done and from a student's point of view, the exhibits peaked my interest just enough to want to know a little more.
When we were outside the building, we were back on the Harborwalk I mentioned in the previous post. Only this time we were on a different side.

Afterwards we drove over to that sandy patch straight ahead, called Castle Island. It doesn't have a castle, nor is it an island anymore, but there is a cool fort and the parks department has done a nice job keeping up the walkways and playground. Lots of people were out and about, enjoying the weather and a nice, open place to play. Mom and I enjoyed some soft serve from Sully's. You know it is officially summer when this place opens, it's usually a story on the local news!

For dinner we went to Patriot's Place in Foxborough where the Patriot's play. Over the last few years stores and restaurants, even a hotel, have opened next to the stadium, right there in suburbia. We met Mom's girlfriend's from the church we grew up in, and caught up over bowls of pasta, salads and glasses of wine. It really felt like home being with those wonderful women, even though we were in the middle of the Olive Garden!

Friday was the big day! I had scoured the internet for weeks trying to find just the right Red Sox tickets. I had looked forward to this game before school was even out!

We headed into the city early, boarding a train for Harvard Square. Walking around Harvard on one of the first sunny days of spring is up there with showing off my city. We went to Charlie's Kitchen for lunch and sat in the beer garden. Its definitely a dive compared to other places in the area, but the prices are right and there is nothing better than drinking a beer outside and enjoying your company. I then successfully navigated the bus system, a first for me, over to Kenmore where the fun began.

We lost in the end. But what was more important is that we went to the game as a family. Each of us has had opportunities to go on our own over the years, but never together. We had some great fun!

I honestly do not remember what we did Saturday, other than sleep in! We must have gone souvenir shopping, we most likely got Dunkin Donuts and probably relaxed. It was Mom's birthday after all!

For dinner, my boyfriend graciously borrowed his parents mini van and chauffeured my aunt and uncle and the rest of us to one of my Mom's new favorite restaurants in the city, the Sunset Bar and Grill. Parking can usually be a pain, but the gods shone upon us with a spot right out front.
This is probably one of my most favorite photos from the whole week.

It was so nice to have a week full of family time. I was exhausted in the end, but as Nana always says, its important to make memories.