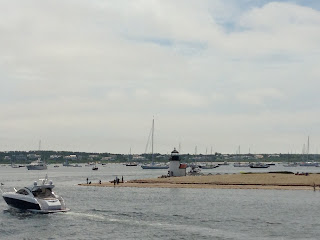 I left Nantucket on a sad Saturday morning. Seriously. I was the last one to leave. I said my good byes to classmate after classmate and sat in my living room waiting for my taxi. Its been a month since I have been home and its like I am in withdrawal. I need to find a way back to the island and I need to reunite with my classmates. Its as simple as that.

The Saturday I returned, my boyfriend and I met with out of state friends for dinner in Cambridge. I ordered grass feed steak tips and it was like I had never had red meat before. It was so good, I ate everything on my plate including the homemade potato salad and perfectly cooked wax beans! I was exhausted but did the best I could to recount the many tales I had from painting and exploring the island, over dinner.

By that Friday, we were off again. This time to just outside Philadelphia to visit friends. 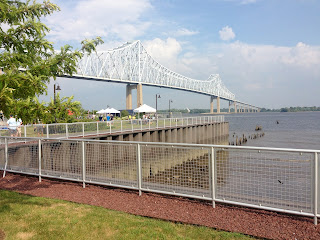 On that Saturday, we had tickets to see the Philadelphia Union play Seattle, Washington. This is the view outside the stadium of the Delaware River and the bridge that connects Pennsylvania and New Jersey. But don't quote me on that, as I am not 100% on my geography. 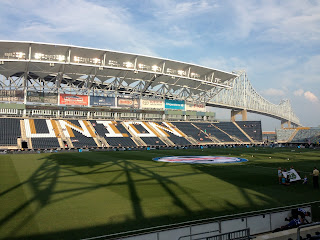 The stadium was absolutely beautiful. My boyfriend's buddy works for the major football team down there and through that,  was hired to do the instant replay video on the big screen during the soccer game. Needless to say, we got great seats, thanks to his boss. Thank you! We also got there super early and took advantage of the free stuff outside. We got free samples of awesome Turkey Hill ice cream. I seriously think my new favorite is salted caramel, but we can't get it in MA. We also got hot dogs for a dollar! We should have taken advantage of the beer prices, but it was so hot that water was the ticket. Plus, inside we got souvenir cups with our one beer purchase. 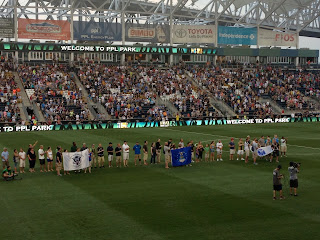 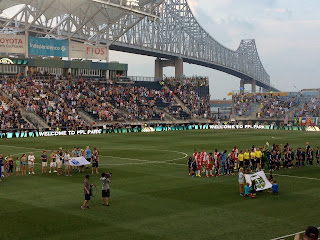 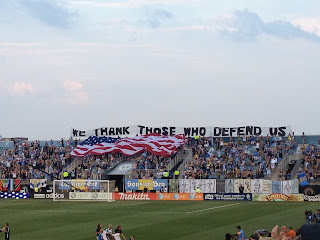 The night we were there was also the night service members were honored. I had goosebumps during the opening ceremonies. 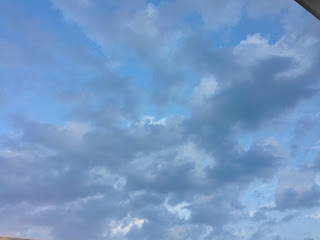 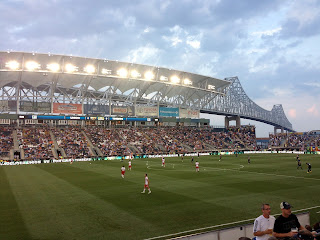 Clouds rolled in during the game. At one point we were asked to retreat to the concourse due to thunderstorms! Thankfully it wasn't that bad. In fact, after the storms came through, the air was much lighter and much more pleasant.
I had never been to any kind of Philadelphia sports game, let alone soccer, but I was thankful that our experience was rather tame and enjoyable. I might even go to another soccer game, it was that much fun! 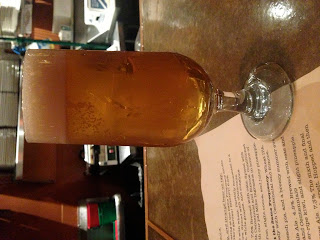 I thought I rotated this but Picasa is not working with me this evening.
After the game we went to a super small brewery, Tired Hands. Granted it was just after midnight, but the kitchen was closed. They had done so much business during the day that they ran out of food. Good for them! The bar back took pity on us and got approval to bring us a pickle plate. I love pickles! There were two kinds of pickles, sweet and almost hot, not sour. And pickle beets plus bread. I needed more food, but considering, I was thankful. And darn, it was good! The bread was made fresh that morning. The pickled beets were spicy and awesome. Plus, the beer was fantastic.  My favorite was called We Are All Infinite Energy Vibrating at the Same Frequency. Crazy name but it was delicious!

Sunday was a nice, family like day. My boyfriend's college friends, their wives and children came over for some lunch and snacks. Aside from weddings, we hardly get to see each other as a group. Unfortunately one of the little ones hadn't been feeling too well, and as his folks were hosting, they were in and out with him. It was a nice chance to catch up though. It reminded me of the big Sunday afternoons my Nana always had when I was a kid.

Monday was our last day and we were really happy that the little guy was feeling better. We hung out all morning, playing with blocks, trying to go up the stairs and sneaking to the kitchen to steal some dog food. At one point I was under the kitchen table with him playing with cars. But shhh, don't tell mom! I even sneaked a picture of my boyfriend playing blocks, but I am going to save it for myself. Sorry!

We left super early Tuesday morning and it was a thankfully uneventful drive home.
I had Wednesday to Friday to finish my paintings for class and until Sunday afternoon to get my house ready for my mom's week long visit! Look for a post about our Boston extravaganza soon.